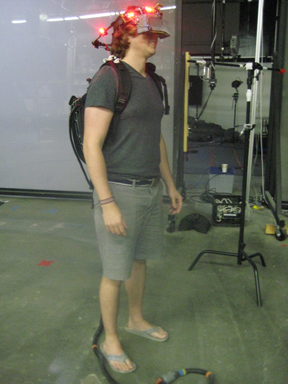 RiotLeak has been uploaded to the Virtual World with the help of the Institute for Creative Technology. 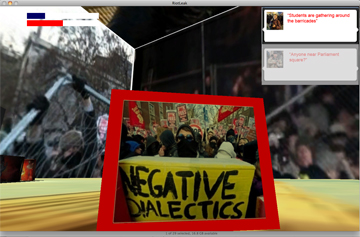 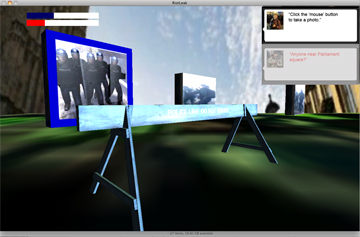 For build Eight I decided to add a “Taking Photos” mechanic and Messaging HUD.

The idea was to  enable players to experience what it would be like to “be there” as a photo journalist. 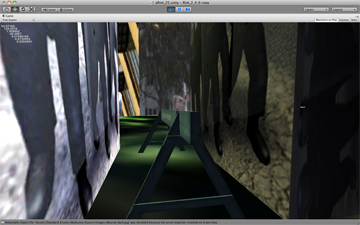 For Build Seven I decided to re-enact youtube video footage of protestors fighting with Police over possession of a fence.

The idea was to enable players to re-enact the event from the perspective of a photo journalist.

The result was a build incorporating the movement of pieces. 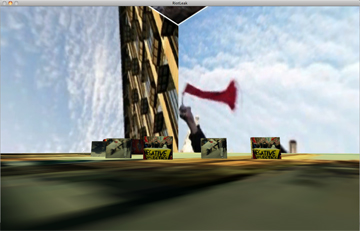 For my sixth build I decided to continue developing the Game Board by adding Game Pieces and Objects. I created game pieces for Photo Journalists, Student Protestors, and Riot Police. I created game objects by adding signs and barricades.

The result was a game board with pieces and objects. 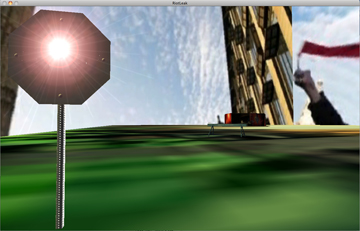 For my fifth build I decided to experiment with entering from the fringe or outside of my reconstruction layout. Incorporating elements from previous builds, I added more objects and triggers. The idea was to test what the experience of what “being there” would be like if you started from the outside of the city, as either a protestor, photo journalist, or police officer – and then made your way into the center.The result was a Game Board where players start in a large “open” space. 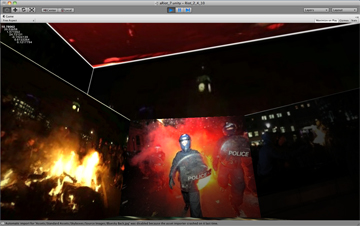 For my fourth build I decided to experiment with sound. Returning to the “inner kettle” of the second diarama, I added a distinct sound clip from an anti-war protest in London.

The result was a digital diarama focusing on the psycheographic space of protest sound.

Much like the second build, this digital sound environment created a mix of interior and exterior space. The use of singular sound in this build created an additional sense of space outside of the interior kettle. 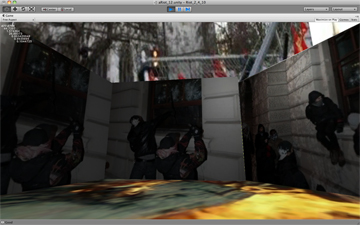 For my third build I decided to change the center of my spatial reconstruction from fire to the closely adjacent looting and vandalism of the wealthy homes and Top Shop.

The result was a third digital diarama of a second place within the psycheographic space of the student riots.

To change your place from the center fire to the adjacent Top Shop and homes area, leave the center area and touch the megaphone.

For my second Unity build I decided to focus on going deep within one area of “space time”.

For this second Digital Diarama, I expanded the sense of psycographic space by filling the skybox and allowing the player to explore beyond the “inner kettle”.

The result was a kind of mixed interior and exterior space, that was more immersive than the first build. 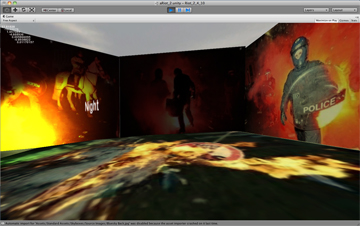 For my first Unity build, I made a digital environment using found photos that were captured at the event.

Starting from the center of my spatial re-construction plan, and keeping in mind the following design question; “What would it be like to be there?” – I decided to focus on the center point of my psychogeography.

At the center of my psychogeographic space was fire, so I re-created my perceived sense of time at that place, through a kind of kettled presence where the player would be immersed in the space.

The result was a digital diarama.